Flutist Brian Dunbar performs the West coast premiere of Movements for Flute and Orchestra, a new work by trailblazing composer Carlos Simon. In a score that takes inspiration from themes of redemption and self-will, Simon inspires the uplifting sense of possibility also present in an iconic spiritual and the exuberance of Beethoven that complete this not-to-be-missed program. 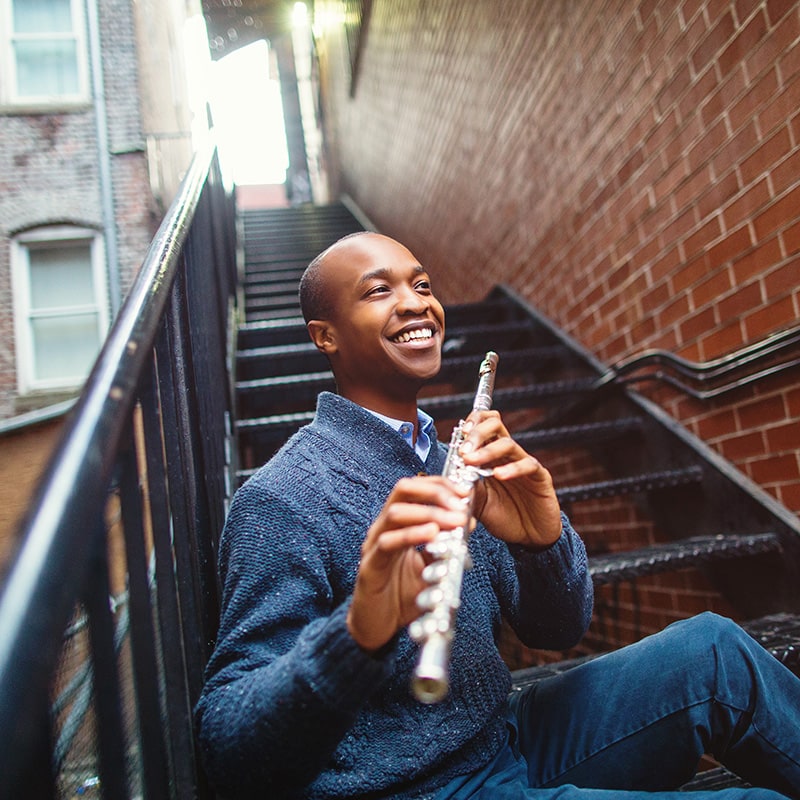 Dr. Brian Dunbar, a native of St. Augustine, FL, enjoys performing as a soloist, orchestral performer, and chamber musician, in addition to his activities as a flute instructor. He earned a Doctor of Musical Arts from Louisiana State University, Master of Music from the University of Michigan, and Bachelor of Music from Stetson University. Dr. Dunbar is the Assistant Professor of Flute at the Crane School of Music at SUNY Potsdam. Previously he held teaching positions at Southern University and A&M College, Southeastern Louisiana University, and Louisiana State University.

Brian has considerable experience as a performer in multiple settings of professional performance including concerto, recital, chamber, solo, studio, and orchestral contexts. He has been recognized in the Monroe Symphony League Marjorie Stricklin Emerging Artists, Stetson University and Louisiana State University Concerto, Sankyo Flutes Orchestral Excerpts, Music Teachers National Association and the Louisiana Flute Society competitions. In 2018, he received First Prize in the inaugural International Low Flutes Festival Alto Flute Competition in Reston, VA. He has performed at The National Flute Association Annual Convention in Chicago, San Diego, and Orlando, and Salt Lake City. Additionally, he is a featured collaborator at the annual New Music on The Bayou Summer Festival in Rutson, LA.

Brian has participated in performances internationally and throughout the United States. Appearances have included U.S. & European tours as a counselor and member of the Blue Lake Fine Arts Camp International Exchange Program and as a guest lecturer and performer at the Initiatives Meetings and Publications on Artistic Research “Hands on Flute” conference in Aveiro, Portugal. He has performed in the flute sections of the Louisiana Philharmonic Orchestra, Acadiana Symphony, Dearborn Symphony, Battle Creek Symphony, and Sphinx Symphony Orchestra, in addition to other regional orchestras throughout the United States.

Prioritizing engagement in the broader community, Brian has served on the Board of Directors for numerous community organizations and is a former Teaching Artist and Development Officer for Kids’ Orchestra, an El-Sistema inspired non-profit organization in Baton Rouge, LA. He is also a member of several dynamic music organizations, including The National Flute Association’s Diversity & Inclusion Committee, Music Teacher’s National Association, and is a member of the globally recognized Sphinx Organization, which aims to promote inclusion and diversity in the arts.