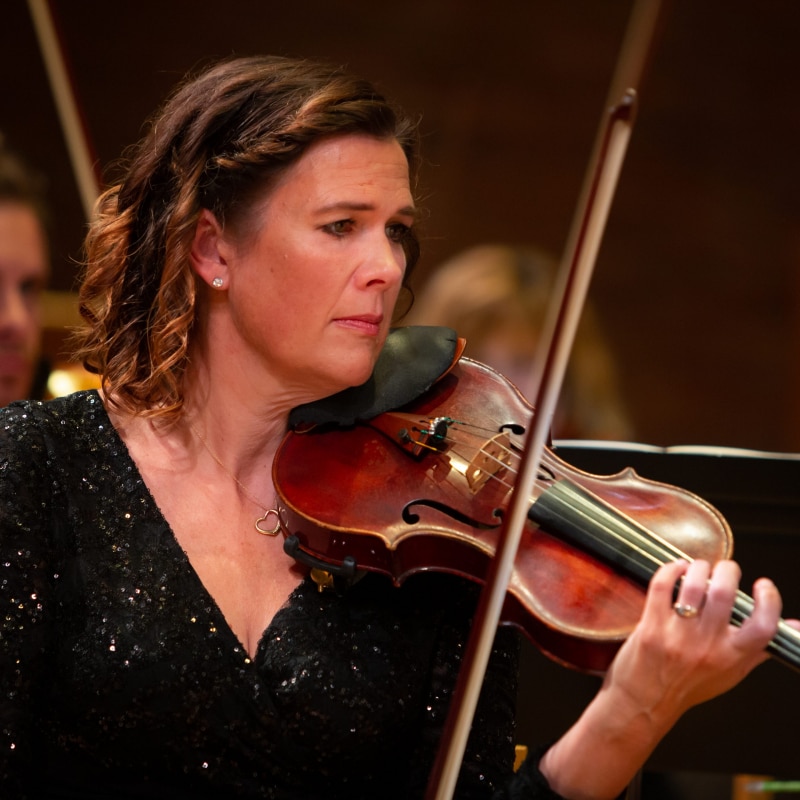 Dawn Carter has been serving as the concertmaster of Portland Columbia Symphony since 2004. She has had the honor of being concertmaster for the Vancouver Symphony, Portland State University Orchestra, and Portland Youth Philharmonic. Ms. Carter performed with the Oregon symphony for 10 years, from 1995 to 2005. She has also played numerous performances with the Honolulu Symphony, Portland Opera, Oregon Ballet Theatre, and the Boise Philharmonic.

In 2008, Dawn founded the Chamber Music Camp of Portland and Stradivari Academy, where she teaches and runs a chamber music program for 110+ students each summer. At this festival, she has also performed chamber music with artists Diane Chaplin, Hamilton Cheifetz, Fritz Gearhart, and Brian Quincey. She loves teaching and helping students move from beginning chamber groups to professional players.

Dawn received both her Bachelor’s and Master’s of Music in Violin Performance at Portland State University where she studied with Carol Sindell. She has also studied and played in numerous master classes for teachers including Joseph Gingold, James Buswell, Herbert Greenberg, and Michael Foxman. Ms. Carter has been the recipient of full scholarships to the Great Woods Institute of Music outside of Boston, directed by Michael Tilson Thomas, and the National Orchestra Institute in Maryland, where she performed under the batons of Yoel Levi and Catherine Comet.

Ms. Carter was part of the Portland delegation that toured Sapporo, Japan in 1993, playing concerts during the 35th anniversary of the Sister City program between Portland Sapporo. In 1989 she toured in Europe as concertmaster of the Portland Youth Philharmonic and performed in 5 countries and in many halls including Bruckner Hall.

Dawn and her husband Jonathan are the parents of four children: Katie, Isabelle, and twins Jackson and Jessica Adeline. Dawn loves to play chamber music with her children.